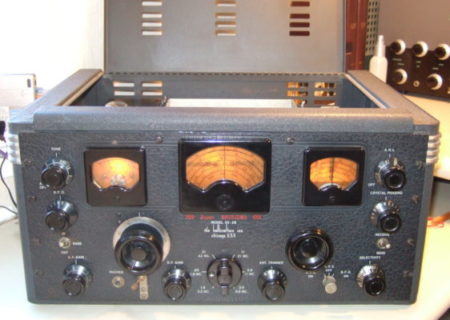 The Hallicrafters SX-28 is just a gorgeous vintage radio.  There isn’t another vacuum tube communications receiver in my collection that really provides a better “glow in the dark” feeling than this one.

The SX-28 is undoubtedly Hallicrafters’ finest pre-World War II radio (excluding Hallicrafter’s special dual diversity DD-1).   This radio came from the era in which the “boatanchor” moniker was born.  The SX-28 is a well engineered and heavy single conversion broadcast and HF receiver offering coverage from .55 to 42 MHz in 6 bands.  Many of these saw service during the War, both in active duty as well as clandestine applications.  The Radio Intelligence Division (RID) of the FCC and the Foreign Broadcast Intelligence Service (FBIS ) used these during the War to monitor enemy communications for American intelligence agencies.

Many good restoration articles have been written about this radio, so this article won’t repeat much of the information presented by those authors.  Most of these articles, which you can easily find on Google, will tell you that the SX-28 is not an easy radio to rebuild and align.  To an extent they’re right.  If you are a novice restorer, you would certainly be better off honing some basic skills before tackling a beast like this.  This radio is full of paper capacitors that should all be replaced, and many are located in extremely tight areas that are difficult to even see, much less reach with a soldering iron and hemostats.  On the other hand, if you are methodical and crafty, the radio easier to restore than many of these articles suggest.

Many restorers present various techniques for disassembling the RF cage so you can more easily reach components.  The daunting nature of this task put me off, as only rarely do I have the luxury of spending that much time on any one restoration.  The more I studied each component to be replaced in the RF deck, the more the task convinced me that with judicious removal of a wire here and there–perhaps unmounting an occasional trimmer capacitor–every component could be replaced.

The good news is that a crafty and inventive replacement techniques worked even better than expected.  So don’t be put off by thinking you’ve got to  disassemble the RF deck to restore this radio.

The audio output stage uses push-pull 6V6 tubes and is known for good sound on AM broadcast.  The distortion is audibly higher many people would like, but a few slight modifications would probably improve the distortion figure substantially.   Maybe someday I’ll look into the issue and publish the results.

As you can see, the 4 sections of the RF deck in the middle of the chassis are very crowded.  Follow the factory manual’s alignment instructions, and you won’t get into trouble.  Only once did I have a problem aligning one of the band oscillators.  I discovered that the band frequencies got further and further off as I rotated the band dial.  I scratched my head and tried again, thinking that I had screwed up something in that RF cage.  You’d probably have the same sinking feeling I did (and I was so bloody careful).   Turns out that you’ve got to make sure you get the CORRECT peak on those coils.  Sometimes there is more than one peak.  Pick the wrong one, and the frequencies on the dial just won’t correspond as you rotate the dial.  The first time through, I used the first peak that came along, and it turned out to be the wrong one.  So keep an eye out for this potential mistake.

You can clearly see how difficult to reach some of the paper capacitors are in the RF deck. Many restorers have tacked the problem by publishing elaborate instructions for deconstructing the RF deck.  Certainly this approach will work, and it is the preferred one with some early Collins radios such as the 75A-1.  However, if you are careful, you’ll be able to replace every single paper capacitor by removing the fine tuning shaft (the black shaft in the photo above) and then unmounting various trimmer capacitors as required to reach a part. You will need several pairs of good hemostats, with both straight and angled teeth.

Here are a few restoration points and suggestions:

1.  Be careful around the dial scales when you clean the radio.  The material is brittle and the makings are easy to rub off.  The paint isn’t even very resistant to water.

2.  Don’t miss Bill Feldman’s excellent articles in  the February and March 2005 issues of Electric Radio titled “The Refurbishment and Modification of my SX-28s” (you can still order back issues of the magazine at the Electric Radio site online).  Bill provides a modification to address the radio’s distortion generated by detector clipping.  I haven’t done this yet but plan to give it a try.

3.  Bill Feldman also shared, with anyone who asked before he passed away a few years ago, an excellent SX-28 Alignment procedure.  This is far more detailed than the procedure you’ll find in the manual.  The factory alignment procedure is sufficient, but the extra guidance Bill provides is very worthwhile.

4. Pay attention to the AC line cord.  You would benefit by replacing it with a 3-wire grounded version.

5.  You probably already know to replace all the paper and electrolytic capacitors.  Don’t forget to check the resistors as well.  A considerable number of them in my unit were more than 25% out of tolerance.

7.  If you find the transformers in the IF section won’t peak properly or at all, don’t forget that there is a capacitor inside the IF can.  While these are mica capacitors, they can still drift and so are worth a check if you’re having problems.

Can you see the two dark brown paper capacitors buried deep below the bandswitch?  Look at the round coil form at the bottom of the picture.  You can see a bit of one paper cap at 12 o’clock, and a bit of another at 10 o’clock immediately above that coil.  They are nearly in focus if you look at the picture carefully.  Amazingly enough, by only removing a wire or two from the bandswitch, you can reach and replace these capacitors.

This photo shows the rearmost two RF sections fully restored.  All paper capacitors and out of tolerance resistors have been replaced without the need to go through the more complex disassembly of the RF deck that some restorers have employed.  So if you can find one of these receivers, by all means pick it up.  Once you’ve restored it, you’ll love listening to its warm sound.

John Staples wrote an article about his Hallicrafters SX-28A Reconstruction.  Don’t miss it!