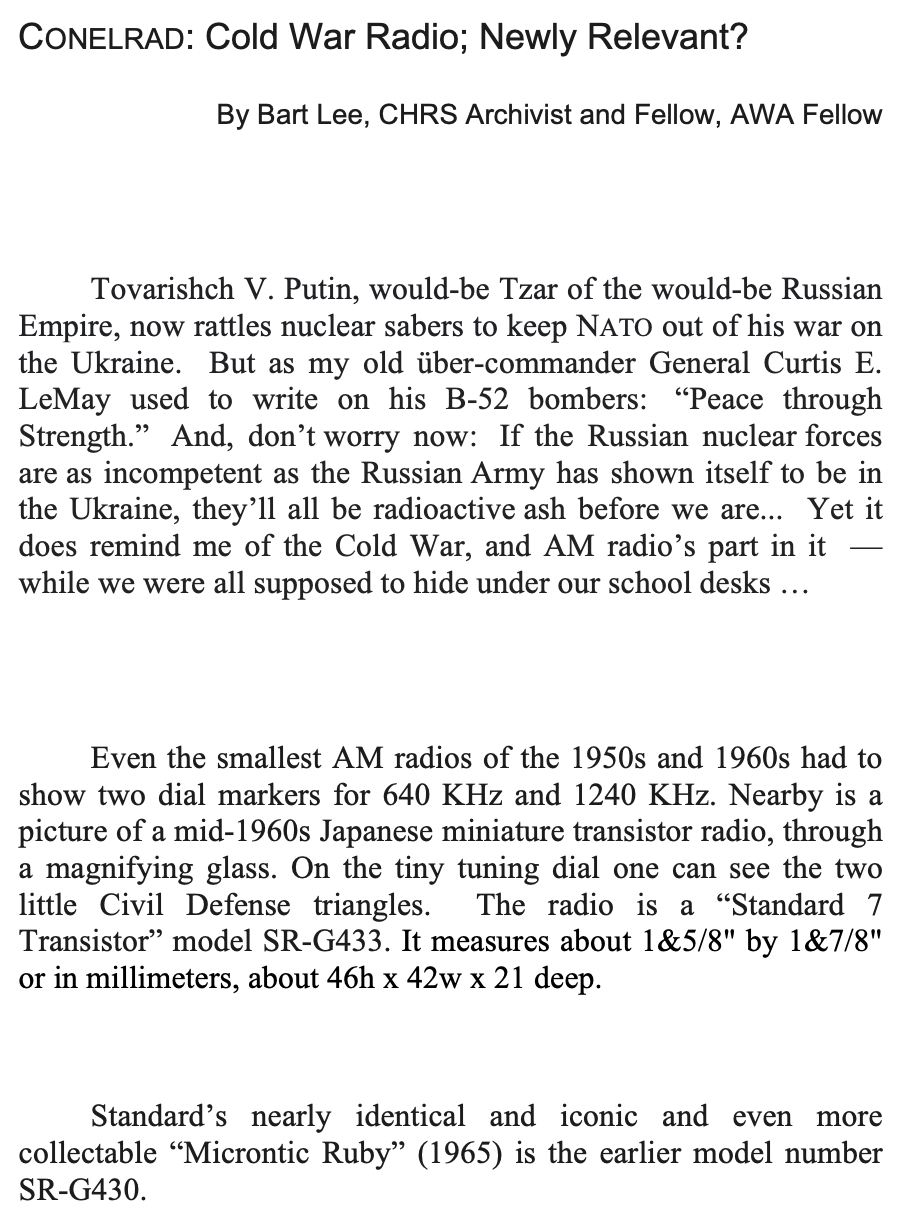 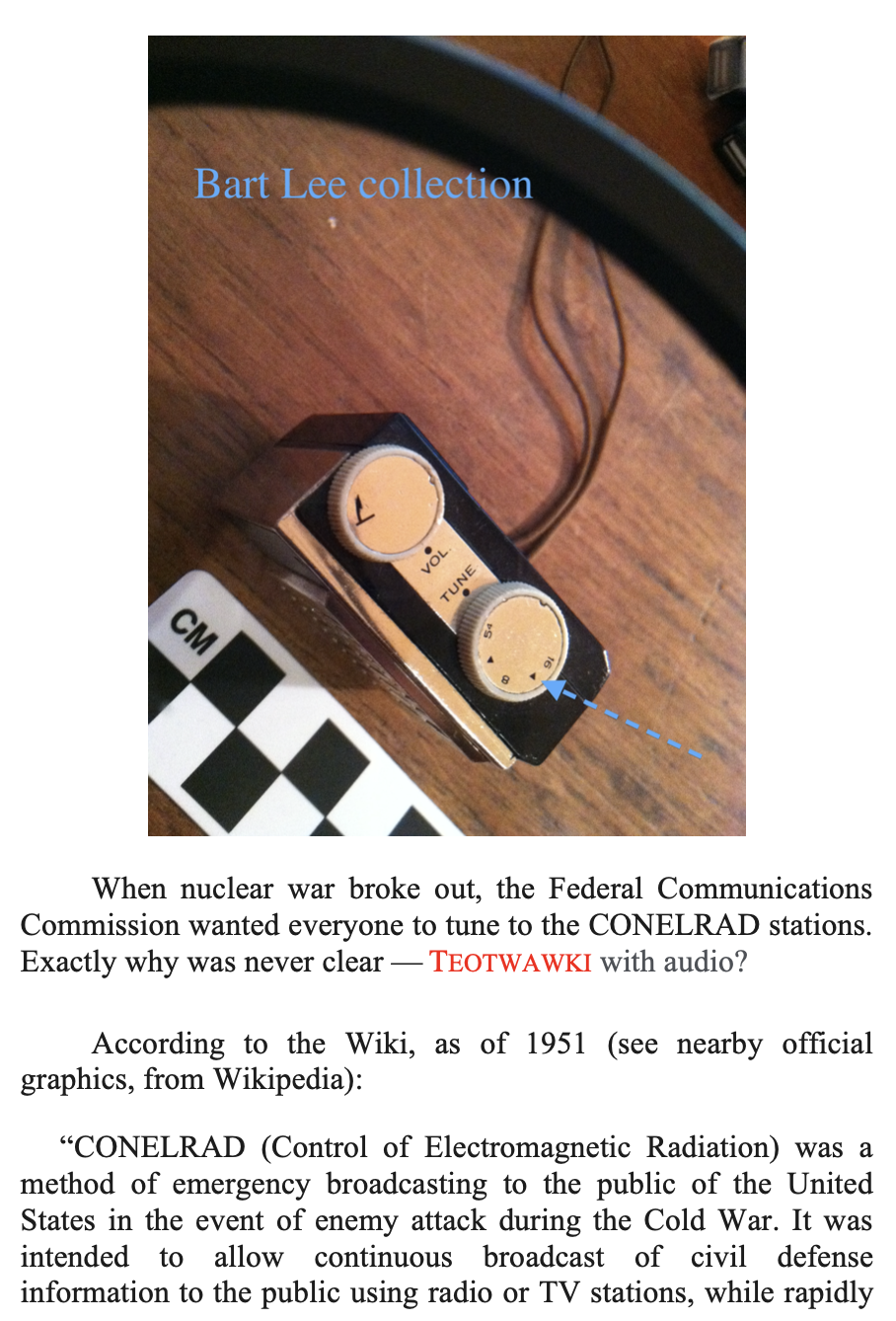 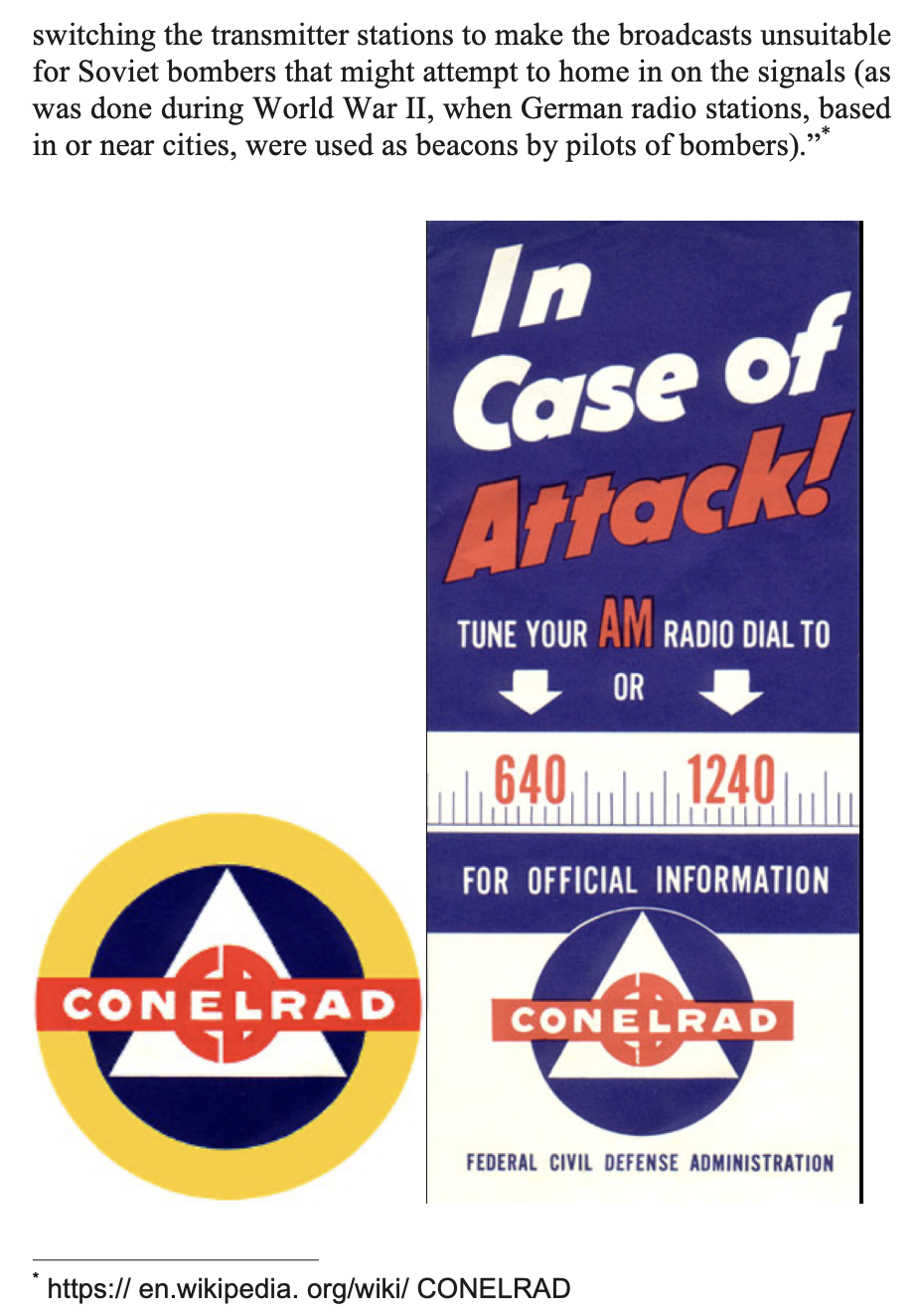 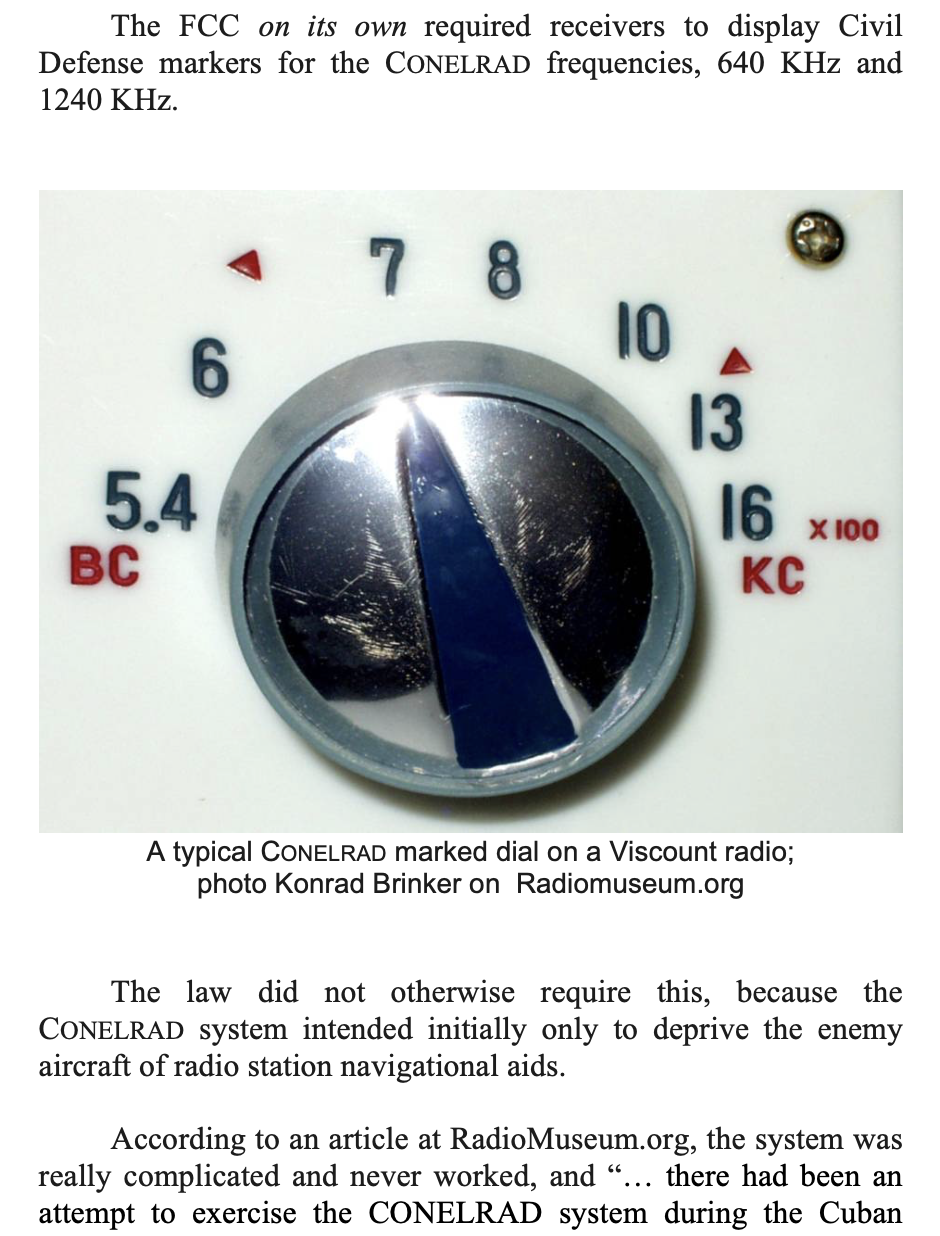 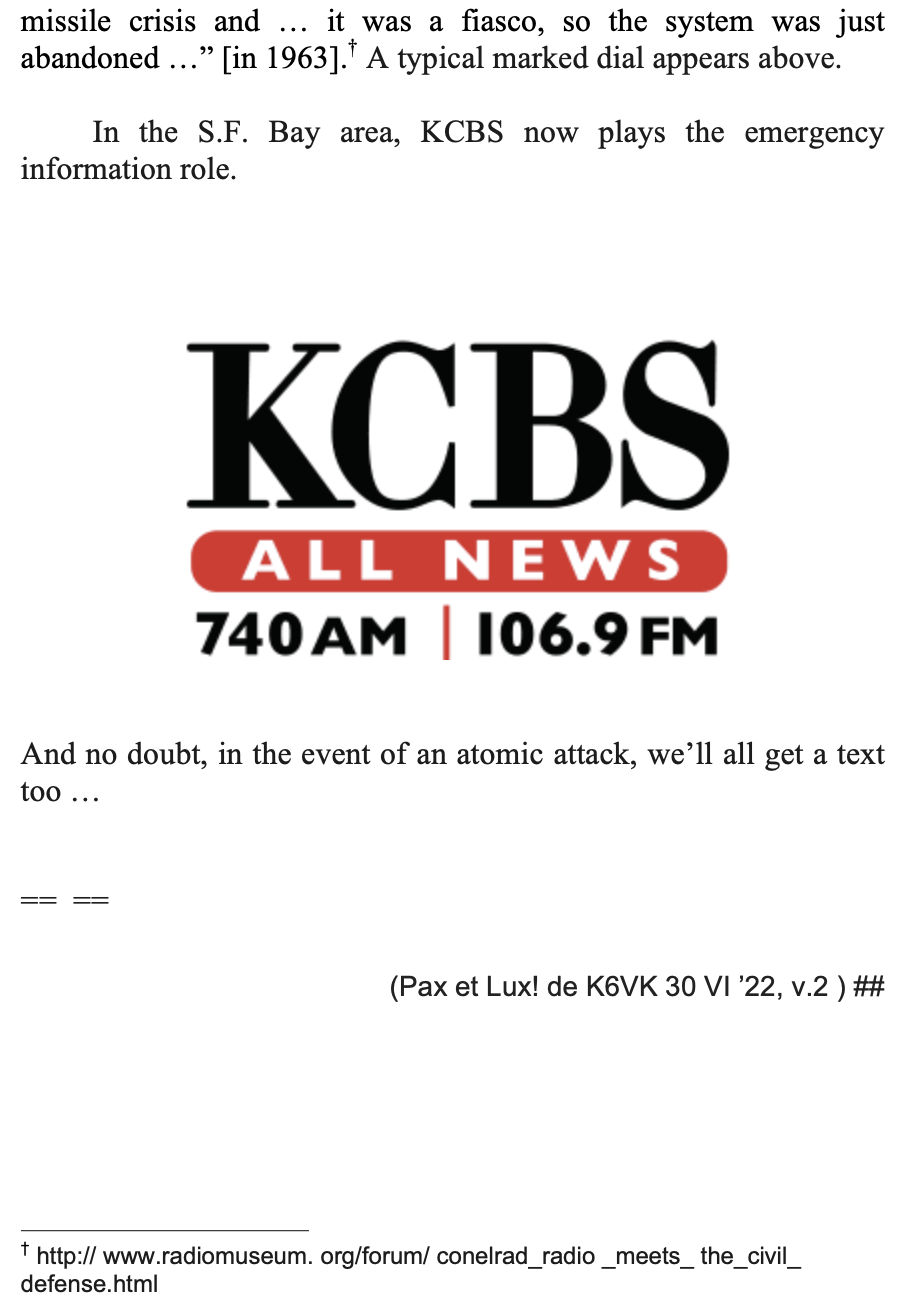 Since we are on the subject, remember these?  They had one over the door of my junior high school.  Lot of good that would have done. This is a genuine sign. It is on my museum door.  Brings back memories.  Got it when they were first made surplus. You got to love the reflective yellow.  BTW, the Twin Peaks Tunnel in San Francisco had one at each end.  That shelter might have worked. 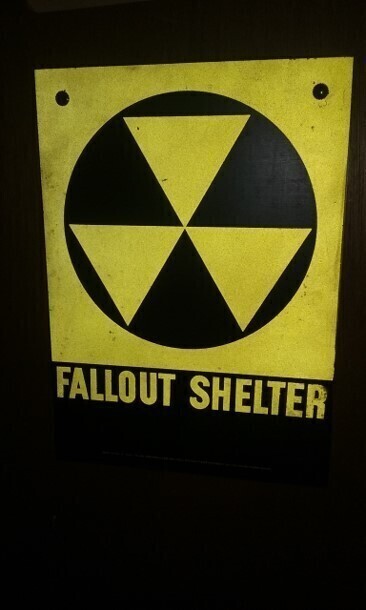 ……………..I grew up 15 miles from Oak Ridge, Tennessee. There was and still is a massive nuclear research complex there and it was responsible for generating the Uranium used in the bombs in WW2. There were these insanely massive emergency horns that sat on towers. Someone told me they were powered by Chrysler Hemi engines. Every once in awhile they would test them. You could hear them miles away. I always felt sorry for the people that lived anywhere near them. There were emergency evacuation signs in case of a nuclear accident. Any building that had a basement had those fallout shelter signs.  I work on a ton of radios from the 50’s that has those Civil Defense markings and never really understood how they worked. If you lived out in the boonies and didn’t have a giant horn to warn you of the impending doom, how would you know to tune to those stations in the first place?

Hi Seth:
Those were different times.  We did not understand the effects of radiation as well as we do now.  The Civil Defense system was based upon the idea that atomic bombs would be dropped from aircraft.  The thought was that bombs would be dropped on densely populated areas with industrial and communication centers.  To wit: people in the boonies were less apt to suffer the effects of a nuclear blast.  Also, many people had their radios on most of the time.  Civil Defense sirens would blow to warn people and then they were supposed to tune in their radios for instructions.  Continuous blast meant attack possible.  Short blasts meant attack immanent.  I remember that people who lived in the northern part of San Francisco were supposed to follow a specific route (based upon prevailing winds) to the Golden Gate Bridge and drive up to Napa.  I lived in the Marina at the time, so I do not know what other people in San Francisco were to do.  Imagine all those people trying to get on the bridge at the same time!  Super rush hour.  Later on, they realized that getting everyone over the bridge would be impossible (not even counting those without cars), so they said we should all go south at least 25 miles.  We were taught what to do if we saw the flash and what to do after the shockwave.  Yes, we were told that we could survive.  I remember my mother teaching me what to do when I was very young.

To this day, I think that the government knew that, if anything happened, people in the cities and other industrial and communication areas were mostly done for.  The main purpose was to give people some security and less worry.  It was supposed to make us feel that the government was taking care of us and had a plan and to keep us calm.  No-one knew what they were supposed to do when they got to Napa.

Now, does it make any more sense?  If so, explain it to me!  Those were strange times indeed.

I remember when I was a kid hearing the air raid siren test just about on a monthly basis. The tests seemed to be run at 11:00 AM every month maybe the first week of the month. I also thought that the San Mateo Hayward bridge would make a good ground zero marker for that one A-bomb that end it all. And if the survivors wanted to tune to KGO or KKHI for news, those transmission towers near Belmont and Coyote Hills respectively would be gone too.

Speaking of which, after the 1989 earthquake, KGO lost their transmission towers. Two of the three were bent over in half. They managed to switch to satellite transmission somehow and remained on the air. I remember hearing Jim Dunbar reporting.

As for TV broadcasting, only KPIX remained on the air. Someone there had the foresight to install a backup generator for the station only months before the earthquake. Dave MacElhatten was on the air for a good 6-7 hours growing a “5 o’clock shadow” as we all watched him in the minimally lit studio. Strangely, I don’t recall any one particular Civil Defense station broadcast that day.

Our Civil Defense didn’t amount to much in the Nuclear Age. (Sure, we could all go to Napa, and then eat grapes?).  But the Russians (now led by Vladimir (“Vlad the Impaler”) Putin, put together a massive and comprehensive civil defense infrastructure of shelters and the like during the Cold War.  As far as I know, that system is still in place. Any nationalist dictator like Putin is unlikely to be rattling nuclear sabres without some sense of protection from retaliation.  In a nuclear war, the US would be radioactive toast, but then so would every other country north of the Equator, civil defense or not.  Just saying, you know…

In the 1970’s the Oakland Police Department used the old CD headquarters as a training facility. In the back was a kitchen, rows of phones, dispatch cubicles and a large CD transmitter set on the CD AM radio channel. It had a microphone and a cubicle to work from. Across the front of the amphitheater that it was located below, was a super long wire antenna, with insulators and a feed line into the building. The wire ran above the heads of the statues. 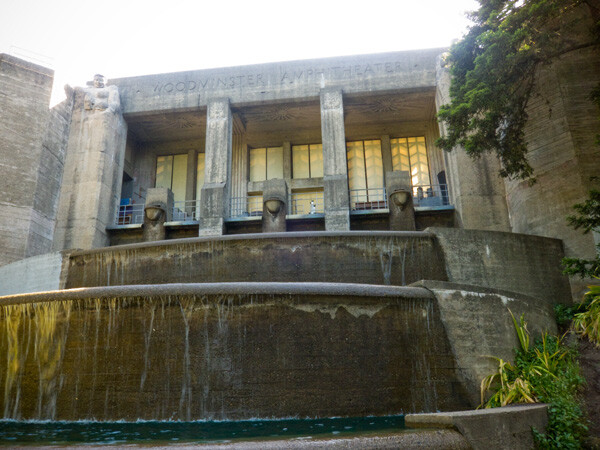 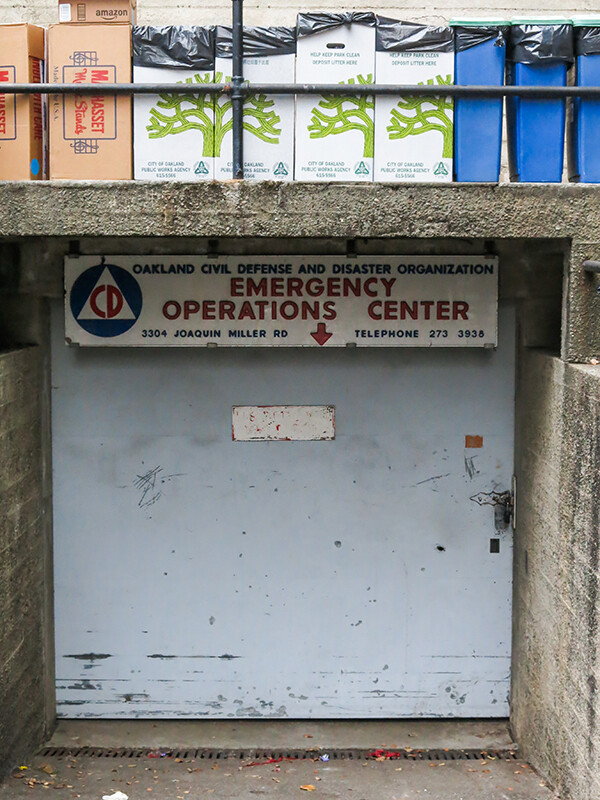